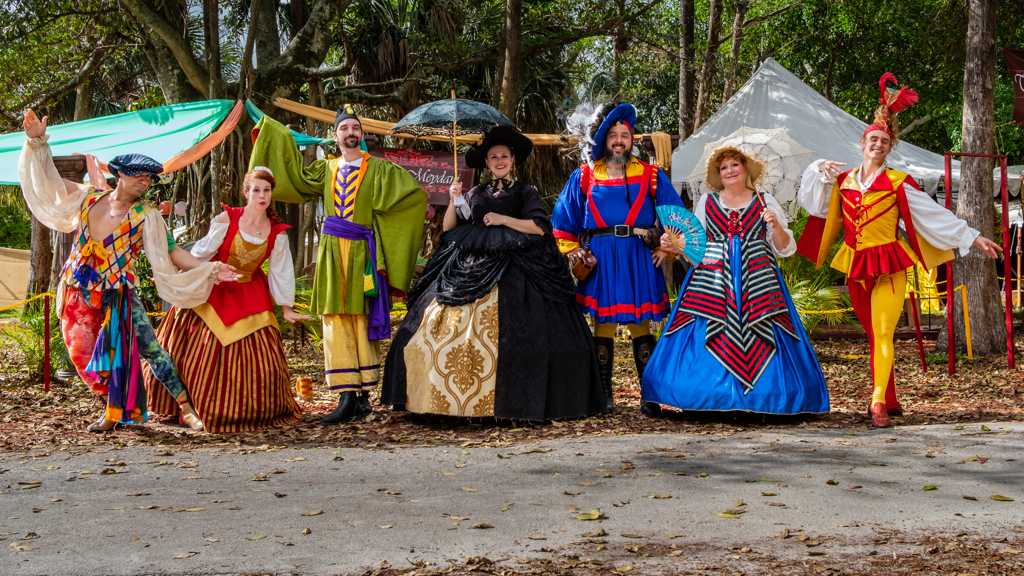 For three decades, patrons of the Florida Renaissance Festival have traveled back in time to become the Villains, Vikings, Pirates, and Heroes of age-old legends.  As the incredible family-friendly festival prepares to open to new audiences in 2022, it brings with it a magical allure for one and all. Fantastic weekends scheduled for its 30th anniversary celebration at Quiet Waters Park in Deerfield Beach, February 5th through March 20th will be nothing short of spectacular!

In 2022, the Kingdom will be graced by returning favorite acts alongside completely new performances guaranteed to entertain and delight festival patrons. The extensive village is an experience in time travel, greeting fans with jousting knights, harmonious melodies, wicked wenches, magicians, and more. A feast made for a King or Queen of favorite food and drink await hungry travelers dressed for celebration, as do the numerous paths leading to artisan craft shops, live music, jesters and much more.

“Lords and Ladies” don your attire and become part of a bygone era of the 16th century as the festival hosts SEVEN magically themed weekends for your enjoyment and entertainment! So much to do, see, and remember, the 30th annual Florida Renaissance Festival promises to be an event unlike any other. Your imagination will be captured, as time is turned back for a memorable, magical, mythical experience. (But don’t forget to snap those selfies!) Wild entertainment will make you feel you’re in a movie while live music, hearty themed foods, and quenching drinks for all to enjoy safely will be available.

“For 30 years we’ve provided South Floridians with a Renaissance experience unlike any other, where fans can commemorate their favorite time periods and myths of cultures,” says Bobby Rodriguez, founder, and producer of the Florida Renaissance Festival. “This will be a very special anniversary for everyone involved, with lots of surprises! So, get ready to dress up in your favorite period garb, wield your magical wand, and rejoice with us.”

Recognized across the country for setting the standard of exploring facets beyond the Renaissance, the festival treats patrons to the magic of sailing on the high seas with Vikings and Pirates, while incorporating new, exciting experiences each year.

Calling all Pirates, Buccaneers and Scallywags! We invite you to come aboard and set sail for a rollicking good time at the edge of Quiet Waters Park. The port hosts the annual festival of music and merriment, and our Pirate crew welcomes you to a magnificent merchant marketplace showcasing wonderous wares from all corners of the known world. There’s diverse entertainment, and food and drink suitable for the Captain, the Commodore, his crew, and you to enjoy! Raise a tankard and cry “Land ho, here there be fun!” Arghh!

They came roaring through the icy mists of the far North in longboats and flame. World travelers, explorers and conquerors, these brave warriors and protectors established trade that introduced much of Europe to the goods and customs of far-off cultures. The Vikings are loyal friends yet fearsome foes, and they are here in our village this weekend to dominate the day!

The unexpected is never a surprise on Steampunk Weekend! Time and space converge at the crossroads of literature and technology in this clever and confusing weekend of wonder. We celebrate a past that never was and a future that might have been. All things are possible in the fertile fields of imagination and invention. It’s an adventure that spans the centuries!

For Wenches Weekend we honor and celebrate all the glorious goddesses in our lives. This weekend recognizes all the wonderful women who “get it done,” the council of caregivers who are wives, sisters, daughters, and mothers, as well as those magnificent and incomprehensible muses who inspire poetry, music, and art. It is with deep respect and heartfelt affection that all men of the village should bow to these beauties, to demonstrate their utter dependence and submission to those who inhabit hearts and inspire actions!

Heroes and Villains – A Cosplay Carnival! – March 5th and 6th

The warriors of light and the armies of darkness wander the village this weekend. Will chaos reign or will good fortune prevail? Are you a hero or a villain? It’s all about two sides of the same coin. Just remember, that without the darkness we would never notice the light.

Eat, drink and be merry as we revel in the mysteries and magnificence of the Celtic nations of Scotland, Ireland, Cornwall, Brittany, and Wales recognizing rich traditions of music, dance, storytelling, and superstitions. On Saint Patty’s Day, everyone is Irish, so wear something green, grab a pint, kiss your best lad or lassie, and celebrate the heather-covered beauty of the Isles of the North!

Harry Potter and friends, and the entire staff of Hogwarts, and all magical academies of higher learning, issue an invitation to angels, elves, fairies, ghosts, goblins, imps, nymphs, ogres, pixies, sirens, and zombies – along with the magicians, druids, sorcerers, students, wizards, and witches who summon them! A benevolent spell is cast to call forth a magical finale to our festival. The unseen world is all around us with the blessings of enchantment and empowerment. Whether you are a Gryffindor, a Hufflepuff, a Ravenclaw or a Slytherin, all are invited and welcomed to our magical village!

The 2022 season also includes a variety of fan-favorite acts and performances with an exciting lineup of entertainment that includes something for everyone.

Dragons The Gathering, the largest touring display of robotic dragons in the world, invades South Florida this February. More than a dozen monstrous dragons from myths of many cultures – from Persian winged lions to Mexican feathered serpents – will be roaring, slithering, flapping and singing at the Fair. The dragons – up to 20 feet in length – are the creation of Dino Don, Inc., the world leader in robotic animal exhibitions.

Medieval Folk Band from Italy! Rota Temporis, a pipe and drum ensemble of musicians providing an energetic, tribal show of sound and movement. The talented musicians from Europe are conducting a World Tour!

A new music duo performing on multiple stages with a combination of music from many different regions with a healthy dose of comedy. Join in the fun for Germanic sets in the Biergarten along with other live melodies around the festival from the duo.

This comedy duo will have you in stitches as you laugh at leisure and beware – expect to become involved in the duo’s comedic adventure as new and unique stories take shape that involve audience participation.

Prepare for an adventure – Wolgemut performs historical music on original instruments such as the medieval bagpipes, shawms, and bombastic drums as well as quiet instruments like the flute, medieval fiddle, and harp. Playing at international festivals around the world, Wolgemut promises to leave everyone “in a good mood” which is the translation of his name!

Prices range from $32 for adults and $14 for children ages 6 to 11 years of age. Children 5 and younger are free. Special seasonal passes are available for $150 (adults), $89 (children) and group ticket rates are also offered.

While costumes are not necessary for admittance, thousands of people each year enhance their experience by donning garb from the Renaissance era or participating in one of the festival’s special themed weekends.