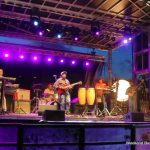 The South Florida Garlic Fest is putting its 21st anniversary music lineup in the people’s hands. For twenty-one years, Garlic Fest has brought hundreds of local, national and international performers to grace the stages of “The Best STINKIN’ Party in South Florida”. This year they are asking their social media fans to pick who they want to see perform.
The producers of the Garlic Fest are holding a social media contest to determine the two-day festival’s entertainment schedule. The winning band will have the opportunity to open for the national act performer on Saturday night of the festival. The runners-up will be scheduled to perform throughout the two-day festival. Bands of all genres and from all over are welcome to enter.
“We’ve never done anything like this before” says Nancy Stewart, Executive Director of Festival Management Group, the producers of the Garlic Fest. Garlic Fest has been a launching point for many big name performers, according to Stewart, “bands have told us time and time again how Garlic Fest launched their career.”
Garlic Fest has always been about giving back to the community. The festival relies on volunteer organizations to staff the event, donating over $610,000 in the last 21 years.
“We’d like to be able to give a local band the chance to perform in front of our fans and our national acts.” Says Lindi DiMaio, Marketing and Communications Director at Festival Management Group.
To enter the contest bands must submit a video of a performance. The deadline is Monday, September 30th.  Out of all the submissions, the top ten bands will be chosen by a select Garlic Fest committee. On Oct. 1, the Garlic Fest will post the top ten band videos on their social media platforms. The band with the most likes on their video’s post, wins.
For more information, please visit: https://garlicfestfl.com/battle-of-the-bands-contest/

ABOUT THE SOUTH FLORIDA GARLIC FEST

Garlic Fest is a popular food and entertainment two-day festival that features national act entertainment, Gourmet Alley food area with over 100 garlic laced menu items, a large children’s amusement area with rides, hundreds of art and craft vendors and full liquor bars. Founded by a group of local folks looking to establish a fund-raising source for local non-profit organizations, the event relies on volunteer organizations to staff the event.

If You Play It... they will come! Great night at @TheFunkyBiscuit with @Marvin_Hawkins🤘