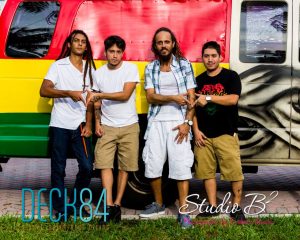 Counteract Crew band leader Steve McGowan, aka Jah Steve, has music in his blood and in his bones and the Miami native has been involved in the entertainment industry for most of his life. Steve started off in the music business around 1996 as a sound engineer setting up audio equipment for live stage events. He soon developed a life-long love for music as he became a regular and competent stage technician for the many Caribbean acts performing in South Florida.

A self-taught guitarist and musician, Jah Steve eventually joined Crisis, a local backing band that provided the opportunity for him to learn and play a wide variety of popular songs and rhythms. After this invaluable experience, Jah Steve became the band leader and bassist for 4th Dimension, a South Florida Reggae show band.

Over a fifteen year period, 4th Dimension became a staple at venues from Miami Beach to downtown Fort Lauderdale, to West Palm Beach. During that time Jah Steve also performed before thousands of fans at events like the Bob Marley Festival in Miami and at other major festivals and concerts nationwide across the U.S.

The Counteract Crew is filling the high demand and constant need in South Florida for quality live Reggae acts. Music lovers can catch these musical craftsmen performing live at venues around South Florida and fans should look out for their new recordings coming out in 2016.