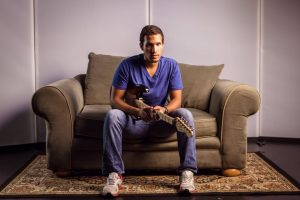 Music has been such a passion for me for as long as I remember starting off when I was six years old on drums. For me there were so many artist that began to be soiled in me at such a young age such as the greats Buddy Guy, Stievie Ray Vaugh, Eric Clapton, B.B. King, Stieve Wonder and other artist we know John Mayer, John Legend and Jonny lang. So as you can tell blues, soul, funk and R&B has be molded me and i tried different way of exprecing it if it was through singing or different intsruments but none was better then writing a song about it. The feeling you get when you right a song about something you go through or something going on in the world is a feeling I can’t describe better then “Freeing” saying what needed to be said and exprecing it in every show…free. So i crafted it i began writng when I was 15 yeah not all my songs were great but to me they were the best to keep up with what john mayer was selling, so I thought. Now fast foward a few years, I’m 18 years old going off to a school of music, a worship school of music called “Oceans Edge School of Worship” there i am building my guitar skills and writing skills this school was amazing because they new i wanted to be an artist that writes secular music an artist that plays and writes to make the listeners feel good and myself feel good. I couldnt begin to tell you how thankful i was for that because they pushed me and developed me but mpost important ly believed in me and my music. My momma always said the road I’m going down, very little reach the end of success, but I am one to say “yeah…but lets see just how far down I can get”