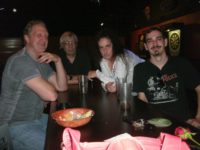 There are times when when someone or something, shakes up the status quo. In the South Florida music scene, there is a band named Chapter 11 doing just that. This four piece unit has found a niche to separate itself from the universe of local club bands. Chapter 11 performs classic rock and blues music largely ignored by these acts as well as by modern day FM radio. The Rock and Roll heard on early FM radio captured, and more importantly, held the attention and admiration of a generation of music fans. This brand of music still thrives today.

Some of these songs were never “Pop” chart toppers, but were more importantly part of something new, different and were timeless. The two founders of Chapter 11 wanted musicians who had a similar desire to play this type of music. A painstaking formation process ensued, as the band the was finally assembled. Set lists were worked up containing classic rock songs and high octane blues numbers the band jokingly refers to as “Blues on Steroids”.

🔸 Vendors can join the Artwalk Village Shops - Signup at https://j.mp/36hZ3uY

Happy #NationalDrinkWineDay! We are missing all our favorite Food & Wine fests.