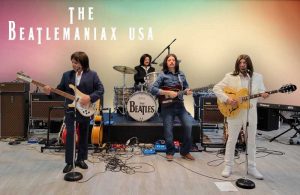 The Beatlemaniax-USA
“An Authentic Tribute to the Touring Years of The Beatles and Beyond”
Music Genre:
Tribute

The Beatlemaniax-USA performs The Beatles classic songs from their “touring years”, 1962-1966 and recreates songs from the “studio years” 1967-1970 which were never performed in concert by The Beatles themselves.  The arrangements have been kept as close to the original recordings as possible and all members are featured during the show. They perform the hits as well as the beloved songs that should have been hits, thus giving audiences a wide variety of The Beatles classics.

The music is performed live with no aid of pre-recorded tracks, except in select numbers, where sound-effect tracks are added to retain the authenticity of the original recording. They can perform a total of up to 2 hours with up to 3 costume changes (currently using any two from “the Cavern” 1962/63, “Ed Sullivan 1964” show outfits and NY “Shea Stadium 1965” concert outfits, and “Hippy Day Out” or “Abbey Road” 1968-69 later period outfits). We also have an optional “5th Beatle-maniac” as “George Martin/Billy Preston” on piano/keyboards.