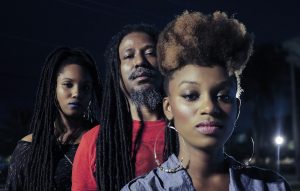 Jahfe
Jahfe is For The People
Music Genre:
Original, Reggae

Jahfé is an international powerhouse pop-roots-rock-reggae band whose rising popularity and following is due to their take charge attitude and uncompromising conscious message. Representing the power of the youth and the wisdom of roots culture, the music of Jahfé not only reflects diversity but the true ability of conscious music to connect to people of all backgrounds. Now in their musical prime, Jahfé specializes in a hard-driving, dubbed-up hybrid of Rock and Reggae that, in its best moments, rise to a visceral frenzy that few reggae acts of any era could hope to match. The band is fronted by lead vocalist Esther Fortune, a ferocious whirlwind of power and energy, a raw dominant and commanding dynamo who is impossible to contain when she hits the stage. Together with Sasha Sanon (band leader, percussionist and also lead singer) and Lady D (a technically trained mezzo-soprano with a vocal range spanning more than three octaves) they produce euphonious harmonies and interweave over the expertly constructed reggae grooves skillfully; an audience has no choice but to submit and be mesmerized as they take in powerful messages of Unity and Livity. We’re definitely NOT a cover band