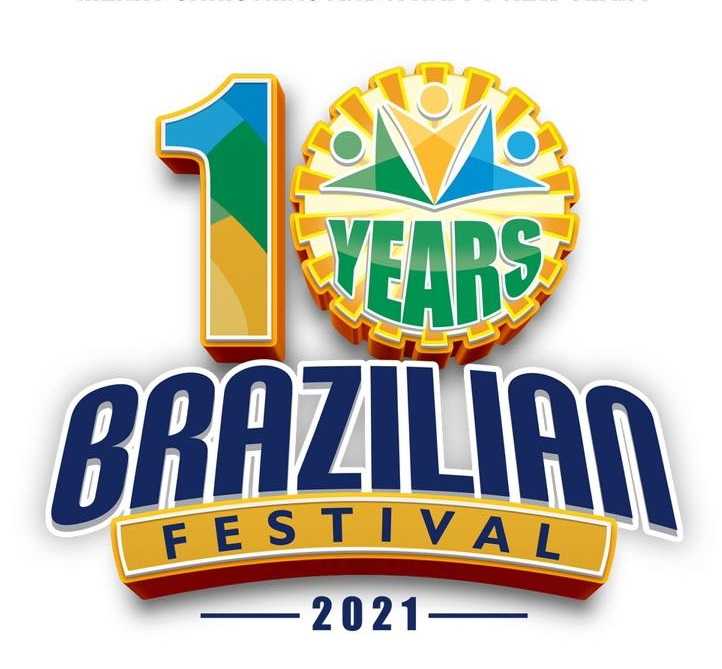 For ten years, the South Florida Brazilian Festival has aimed to promote a message of global unity. This multicultural festival typically gathers a diverse crowd of thousands, features global cuisine from a wide range of local restaurants, dozens of exhibitors, a kids zone, Footvolley tournament, skate ramp exhibition with a ramp raffle with live performances by well known artists, musicians and dancers. The festival is the Southeast region’s largest multicultural festival.

Following a challenging year when live performances were sparse due to the global pandemic, this year’s festival will not only celebrate the event’s tenth anniversary, it will also applaud the world’s ability to unite against the pandemic.

“This year’s festival and our message of global unity has taken on even greater meaning in light of the year we have all endured,” said Luciano Sameli, the founder and organizer of the Brazilian Festival. “We hope this festival will be a joyful oasis for our community to come together.”

Headline band, Smash Mouth, will also be celebrating a major anniversary this year as 2021 marks 20 years since the blockbuster release of “Shrek” and Smash Mouth’s eponymous third (GOLD) album in 2001.  For the festival, the band plans to play all their fan favorites in addition to their brand new single “Camelot” released in May of this year.  The song is a creative collaboration between Smash Mouth and Timmy Trumpet, one of Australia’s beloved DJs known for mixing jazzy trumpet and bright piano with electronic dance music.

While Smash Mouth will be the star Saturday night, Brazilian dance-house DJ Bruno Martini will close out the concert Sunday. Martini has seen a meteoric rise with roughly 1 billion streams on Spotify. He has produced music with Timbaland, Lady Gaga and Katy Perry.

This year’s diverse lineup will also include:

Last year, in spite of the litany of challenges caused by the pandemic, the festival survived and was the only Brazilian festival in the nation to occur live. In order to prevent being canceled, the festival moved to Fort Lauderdale, limited the number of attendees and strictly followed CDC guidelines. This year, the festival is rebranded bolder and even more eclectic. Sameli said the festival is proud to now call Fort Lauderdale home, and thrilled to have Publix as its official tenth anniversary sponsor.

“We pushed through and are determined to succeed,” said Sameli. “Mayor Trantalis and the City of Fort Lauderdale have been an incredible blessing. We are grateful that the City has embraced our festival. Mayor Trantalis recognizes the importance of our mission to promote multicultural unity. And the move to Fort Lauderdale has allowed us to host the festival on one of South Florida’s most beautiful beaches.”

Fort Lauderdale and Broward County are a fitting place for the Brazilian Festival.

Broward County’s Brazil-born population grew by 36 percent between 2000 and 2010, reaching 20,900 residents. The state of Florida has the largest Brazilian population in any state of the country. Based on Brazilian television subscriptions and U.S. census data, it is estimated that approximately 360,000 Brazilians live in Florida. Brazilian tourists also play an important role in the South Florida economy. According to Visit Florida, the state’s official tourism marketing corporation, 993,000 Brazilians visited Florida in 2017. Brazil ranks third in the world for providing Florida with the most tourist visitors behind Canada and the United Kingdom.

“We are proud to strengthen Broward County, and grateful for the local support,” said Sameli. “I am confident this year’s festival will be our best yet.”

Tickets to this year’s festival can be purchased online for only $10 at BrazilianFestival.org. Kids under the age of 12 are free.

For more information, visit the official event website at: www.brazilianfestival.org or call (305) 803- 0338.