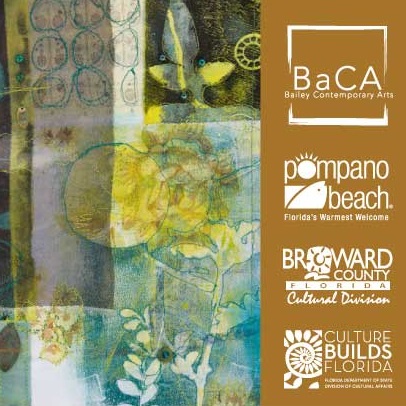 Pompano Beach’s Downtown can trace its renaissance to the opening of Bailey Contemporary Arts (BaCA) on April 16, 2014. In the five years since the ribbon cutting ceremony, the venue has been a catalyst for the City’s emerging cultural community and a key driver for local economic development. To celebrate this milestone, BaCA is having a free anniversary reception of Friday, April 5, 2019 during Old Town Untapped from 6-10 pm. The galleries will showcase two exciting exhibitions, Penta and Tamiami Trail: In the Beginning.

“The importance of Bailey Contemporary Arts cannot be underestimated,” said Pompano Beach Mayor Rex Hardin. “This venue put the City’s emerging art scene in the spotlight with its creative exhibitions, support of emerging artists and a robust schedule of events and workshops. BaCA’s emergence fueled the success of the Old Town Untapped events and stimulated the economic development in the surrounding area. There is much to celebrate during this 5th anniversary, and we are very proud of all of the people who made this venue a success.”

Tamiami Trail: In the Beginning is an exhibition of original artworks by members of the Miami-based Tropical Botanic Artists collective. The botanical subjects were selected to mark the 100th anniversary in 2015 of the start of work on Tamiami Trail, a roadway begun in 1915 in Miami. Today it stretches across the Everglades from Miami to Naples and northward to Tampa, through areas that were largely wilderness a century ago. The exhibition’s more than 30 plant portraits depict species found then and now in multiple vegetation zones along the route. Due to human intervention and changes in water flow, some of the plants illustrated are rare or endangered, and their predominant locations may have shifted, but all persist in South Florida’s landscape.

Presented with support from the Florida Keys Council of the Arts, the exhibition is the result of the artists’ collaboration with Dr. Evelyn Gaiser of Florida International University, who is principal investigator for the local Florida Coastal Everglades Long Term Ecological Research program.

Tamiami is on view in the West Gallery/Blooming Bean Coffee Roaster and runs through May 31, 2019.

This female-fronted band from South Florida is bringing a new sound to alternative rock. Deja Elyze (Lead Vocals/Guitar), Anthony Vilarino (lead guitar/ vocals) Nick Fernandez (guitar/keys/vocals), Alex Athanasaw (bass), and Jordan Solomon (Drums) make up this 5-piece indie outfit. “We want people to have fun with our music but also gain a sense of awareness, consciousness and good vibes all around.” says the band. Deja Elyze’s signature vocals with the band’s high energy performances and rhythmic grooves have garnered much recognition, even in their early years as a band. Coming together in 2014, their first show as an original band was one of the last performances at Miami’s famous Tobacco Road. Since then they have released 2 Eps, “The Blue Room” and “Something Along the Lines”, and they are currently gearing up to release their third, “Face Value”. Some of the bands accomplishments include winning Hard Rock Rising’s 2015 regional competition, winning Broward County’s DUENDE Battle of the Bands leading to their performance in Pompano’s Mess O’ Blues Fest, playing Sunfest’s 2015 main stage, playing Florida Music Festival 2016-2018, opening for Bon Jovi at the BB&T Center and performing at Okeechobee Music and Arts Festival in 2017.

The mission of Bailey Contemporary Arts (BaCA) is to cultivate, incubate and nurture a vibrant visual arts community that enriches Pompano Beach and its goal of being a nexus of art, creativity, diversity, and inspiration. Serving as an incubator for artistic innovation and education, the staff of BaCA amalgamates emerging local and national artists with industry professionals to elevate the creative process. Located in the historic Bailey Hotel building, which was, at one point, the center of a thriving downtown in Pompano Beach. Built in 1923, the historic Bailey Hotel is the second oldest remaining building (right behind the old Farmer’s Bank building next door) and is part of the longest contiguous collection of historic buildings in Broward County.