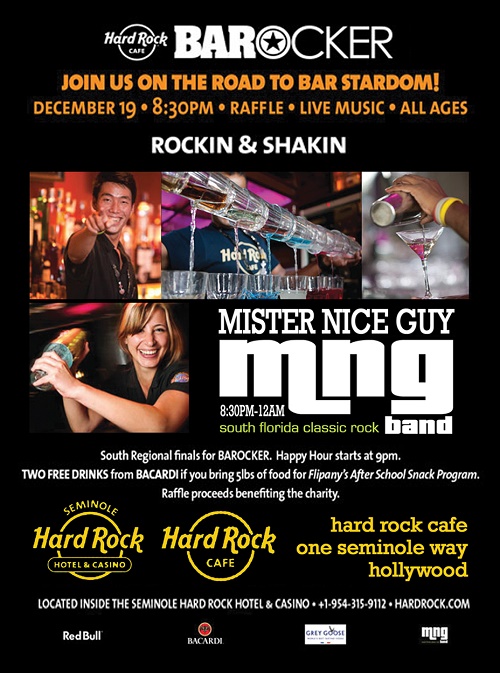 Hard Rock Cafe Bartenders from around the the world have been competing with each other since May to showcase their skills and have a chance at being crowned Best Bartender of 2013.

Following the local rounds, one bartender from each cafe location will be selected to represent their city in a competition with other Hard Rock Cafes in their area, where a regional BARocker champion will be chosen. Regional champions from around the world will then be flown to Orlando, FL for Hard Rock’s annual Global Conference in January 2014 for the worldwide finals, where they’ll compete for the title of best bartender. The grand prize winner will receive an all-expenses-paid trip for two to their choice of one of Hard Rock’s beautiful all-inclusive resort properties and also have their winning drink featured on Hard Rock’s beverage menu for a limited time.

On Thursday, December 19th, On Thursday, Hard Rock Cafe of Hollywood Florida will host the South-Eastern regional round of this rock-star bar battle, featuring the cafe’s best bartenders from Atlanta, Orlando, Nashville, New Orleans and Hollywood, FL. The competition will be judged by a panel of industry experts. Competitors will be judged on several key components, including recipe knowledge, pour testing, accuracy, speed, flair and showmanship.

Come cheer on your favorite bartender (Jessica Bingham will represent Hollywood). Bring in 5 pounds of food to be donated to Flipany’s After-School Snack Program in exchange for 2 free drink tickets from Bacardi!   Live music entertainment to be provided by Mr. Nice Guy from 8:30pm to Midnight.
– See more at: http://www.hardrock.com/locations/cafes3/events.aspx?