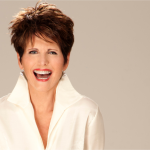 The Broadway Cabaret Series presents the actress, singer and producer Lucie Arnaz for two nights, Monday March 30-31, 2020 at The Crest Theater at Old School Square in Delray Beach. Celebrating a life on stage, Lucie Arnaz returns to her theater roots looking back at some of the roles she has had on stages throughout the world. From her first role at 14 as The Cheshire Cat in Alice In Wonderland to a grandmother hanging upside down on a trapeze while singing about the preciousness of life in Pippin, Lucie and Musical Director Ron Abel offer audiences this brand new concert sharing stories and songs that Lucie has long been known for. With anecdotes and fond memories about her co-stars, directors and musical collaborators, Lucie offers iconic songs and hidden treasures from some of Broadway’s greatest shows and a look at the backstage magic it takes to create them. A not to be missed evening of entertainment celebrating our great American Musical Theatre.

LUCIE ARNAZ began her career on television at 12 starring with her mother, Lucille Ball, on The Lucy Show. At 15, she became a series regular on Here’s Lucy. In 1985 she starred in her own series, The Lucie Arnaz Show, and in 1989 in the critically acclaimed Sons and Daughters, all on CBS. For nearly three decades now, she has toured her critically acclaimed nightclub acts throughout the United States and Europe. She has performed the opening number on The Academy Awards and at the White House. Theatrical awards include The Los Angeles Drama Critic’s Circle Award, Outer Critic’s Circle Award, Theater World Award, and Chicago’s famed Sarah Siddons Award for creating the roles of Kathy in the west-coast premiere of Vanities at the Mark Taper Forum in Los Angeles, Annie Oakley in the Jones Beach production of Irving Berlin’s Annie Get Your Gun, for her Broadway debut as Sonia in Neil Simon and Marvin Hamlisch’s They’re Playing My Song, in national tours of Seesaw, Social Security, opposite her husband, actor/writer Laurence Luckinbill in Whose Life is it Anyway? and opposite Tommy Tune in My One and Only.

A part of the Broadway Cabaret Series; VIP & Premium ticket holders are invited to a post-show Meet and Greet with performer.