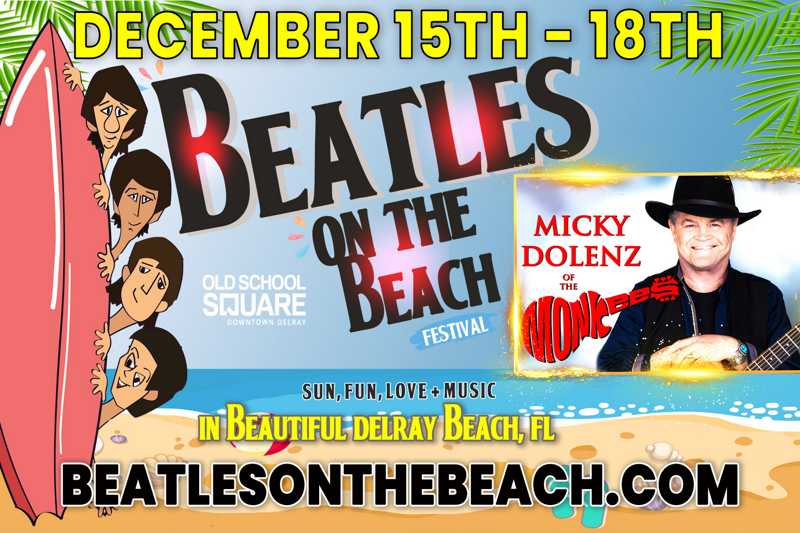 The annual International Beatles On The Beach Festival, a four-day city-wide ‘Experience’ returns to downtown Delray Beach beginning Thursday, December 15th and runs continuously to Sunday, December 18th.  Four FAB Days of Sun, Fun, Love and Music in Beautiful Delray Beach, Florida, with over 20 venues and the entire Village by The Sea joining in, dressing up, and celebrating the iconic music of The Beatles.

During this weekend, the city will host a multitude of artists, well renowned performers and musicians.

Friday, December 16th,the festival kicks off with headliner Micky Dolenz of The Monkees  who will be performing all The Monkees hits, The Best of The Beatles as well as Holiday classics!  A Stellar performance will make for a perfect evening under the stars.

Saturday, December 17th, The World’s Best Beatles tribute band, Liverpool Live, accompanied by The Academy Orchestra, conducted by Maestro Thomas Servinsky, promises to have a spectacular multi-media extravaganza performing selections from Sgt. Pepper, Abbey Road, Let it Be and The White Album. Hailed as a monumental production, Beatles On The Beach was completely sold out during all past performances of this band!

A boatload of live performances by Beatle Bands from around the world:

Another highlight of this festival is BeatleCon, inviting all guests to channel their favorite Beatle, Rock star, Superhero, Harry Potter character, Blue Meanie, Lord of the Rings, Star Wars, Furry Animal or psychedelic 60’s to pop 70’s hippie! Groovy prizes will be awarded for the most inspired and authentic costumes!

This year’s festival is dedicated to the memory of John Lennon, whose music is still very much alive today, over 40 years after his passing! This iconic legend will be memorialized as thousands Sing-A-Long to IMAGINE and All The Beatles classics plus Holiday music!

Premium and VIP tickets available via www.BeatlesOnTheBeach.com Click the APPLE and it will take you to the ticket page on Ticketmaster. All-inclusive, day or weekend passes start at only $29.50 per day or an affordable full event, 2-day VIP Credential for $155.50.  Or to order by phone, call Old School Square 561 243-7922 press 1 for box office or purchase tickets in person at Old School Square.

Save $5 on 1-day or 2-day passes when you use voucher code: COMETOGETHER

Ticket holders will also receive discounts and FREE Food and drink offers all Across The Universe – The Delray Universe of course! More details at http://beatlesonthebeach.com/free-stuff-with-your-ticket/

A signed copy of the award-winning time-travel novel Saint John Lennon, authored by producer, Daniel Hartwell will be available at The event! www.SaintJohnLennon.com

About the Event Producer

Daniel Hartwell’s legacy, to date, boasts successful benefit concerts that consistently engage audiences, the performers, underwriters and beneficiaries. While best known for producing major international music festivals and large concerts that advance green, environmentally sustainable, best business practices; Hartwell’s United We Rock, LLC ® produces with a passion, niche events for major corporations and civic groups.  Alice Cooper to Alice in Chains and talent as diverse as Diana Ross to Kid Rock have appeared on Hartwell’s stages. Imagine receiving book reviews like , “I’m an emotional being  and this story of love and peace touched me, I only hope the next book is Saint Ringo” – Ringo Starr and “It’s about time we have a bloody Beatles reunion, Paul McCartney,” referencing  Daniel Hartwell’s release of the award-winning novel  “Saint John Lennon” which received accolades from Publisher’s Weekly The B.R.A.G. Medallion, Writer’s Digest, calling the fantastical romp through time “an original and riotous explosion of imagination” and the certificate of Excellence in Literature, Royal Dragonfly Book Award. Available on Amazon, Barnes & Noble ® and SaintJohnLennon.com