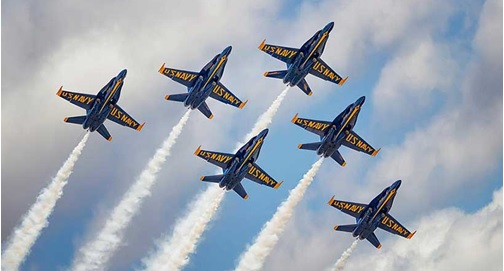 The U.S. Navy Blue Angels will, once again, headline the Fort Lauderdale Air Show, taking place Mother’s Day weekend, May 8-9, over the skies of Fort Lauderdale Beach. The U.S. Navy Blue Angels performance will be one of the first in the F-18 Super Hornet. The team is transitioning from the legacy Hornet, an aircraft they have flown for three decades to a new larger Super Hornet with 40 percent more power.

The team’s four-jet diamond performs precision formation flight with the aircraft wingtips as close as two feet apart while performing loops, inverted rolls, and even high-performance turns. The two solo jets perform high energy maneuvers together and from opposite directions close in on each other at almost 1,000 mph.

During the show’s finale, the six Blue Angels jets come together in the delta formation, flying difficult formations and signature breaks that fill the sky with speed, sound, and smoke trails.

Joining the Blue Angels in the performer lineup will be the F-16 Viper Demo Team. The F-16 is the “Sports Car” of the U.S. military fighter jet community. A single engine, single pilot jet, it is sleek, highly maneuverable, and fast.

The F-16 Viper Demo Team shows off the full capabilities of the jet including high speed maneuvers at over 600 mph and G wrenching turns where the pilot will feel over nine times the weight of his own body. The demo routine will include inverted spins and a three-mile climb straight up that will take less than 10 seconds.

When the 2021 Fort Lauderdale Air Show takes flight over Fort Lauderdale Beach on May 8-9, it will feature a trio of the most extreme and unique aerial performers in the world. The Red Bull Air Force is a team of accomplished and experienced aviation experts who specialize in highly coordinated aerial jumps and aerobatic demonstrations in the Red Bull Bo-105 Helicopter and Edge 540.

Assembled from the most skilled skydivers, BASE jumpers, wingsuit fliers and paraglider pilots on the planet, the Red Bull Air Force has collected gold medals in nearly every discipline with numerous world records to their credit and combine for over 150,000 skydives, 10,000 BASE jumps and a maximum free-flying speed of 340 mph.

Red Bull athletes will perform a series of perfectly synchronized skydives and wingsuit formations including one low-pull skydive from the Bo-105 piloted by Red Bull athlete Aaron Fitzgerald. Two additional skydivers will fly from the Bo-105 in tandem and swoop to the ground while the fourth and final athlete wingsuits and is met by two-time Red Bull Air Race champion Kirby Chambliss in the Edge 540 as he awakens the sky with sound and speed as he loops around the wingsuit flier.  Chambliss is joined by Fitzgerald in the Red Bull Helicopter to round out the performance for a final set of dramatic aerobatic stunts.

Sequence of Events on Saturday and Sunday

The stage for the Fort Lauderdale Air Show is two miles wide and 500 feet high. Spectators can watch from their backyard, balcony, boat or the beach, making it the ideal event for our community to host in the era of social distancing.

For more information on the show or to purchase tickets visit https://fortlauderdaleairshow.com/.

The Fort Lauderdale Air Show is the second destination on the AirDotShow Live Tour that will visit six destinations in 2021 including Cocoa Beach, Atlanta; Ocean City; Maryland; New York; and Orlando.  For more information on the tour please visit https://air.show

Based on last year’s show, live streaming may be available by visiting: https://air.show/livestream/

Enjoy a free concert series with a broad range of musical varieties! Carter Park Jamz takes place on the third Friday of each month from 7 to 10 p.m. at Carter Park. Bring your chairs, picnic blankets, and snacks to relax under the stars.