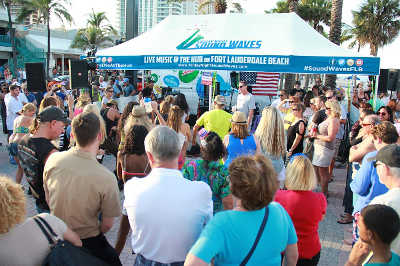 UPDATE 2017: Find up to date concert listings at www.FridayNightSoundWaves.com

Elvis Week (August 10-16) is a celebration of the music, movies and life of Elvis Presley.
Join us as Friday Night Sound Waves presents: David Morin as Elvis on Friday, August 12 for an evening in celebration of the King of Rock and Roll.

Displaying a diverse balance of talent that brews up catchy tunes, SOSOS captivates audiences with their smart musical melodies and lush vocal harmonies. Unusual?.. Not really. But, you could say SOSOS is a band that strays from the usual because they solely base their music around acoustic root instruments. Upright bass, pump organ, acoustic guitars, banjo, mandolin, djembe, drums, melodica, and even a box of rocks at times keeps SOSOS generating their own brand of energy even if the power lines go down!

Enjoy a night of fun, high energy music and a family friendly evening with the Celebration Band, performing all your favorite sing-a-long tunes from the 70’s through today.

September 2 – Woody and the Longboards

Grab a cold drink, leave your worries in the sand, and come hang ten with Woody and the Longboards to kick off Labor Day Weekend. Sponsored by FRLA Broward and Harbor Beach Homeowners Assoc.

In the continuation of our Salute to the Military Series, the all-veteran band, Pocket Change, brings their Funk, R&B, Soul, Motown and Party music and showmanship for all to enjoy

Following in the steps of other newgrass revivalists, Uproot Hootenanny blends bluegrass, country, folk, and jam music, with Celtic instrumentals and ballads into their sound.

Part of our Broadway to the Beach Series, Hot Legs, captures the energy, stage presence, and most importantly the voice of this rock legend, Tina Turner. Passionate, powerful and pure dynamite- these are the words that best describe the Queen of Rock ‘n’ Roll- the indomitable Tina Turner. Kat Riggins Tina Turner Tribute generates energy and excitement everywhere she performs.  This incredible tribute show captures the image, energy, stage presence, legs and most importantly the voice of this great rock legend.

Backed by a dynamic band, soulful vocalists and a swinging rhythm section. No matter if it’s Rock, R&B, Funk, Swing and Soul — This Tina Turner Tribute does it all! Sponsored by Travelhost of Greater Fort Lauderdale.

Multi Award-Winning South Florida based band, Joel DaSilva and the Midnight Howl, bring their slick vintage Rockabilly and Chicago Blues sound that will have you kicking up your heels and swinging in the sand.

The Shane Duncan Band is a High Energy Country-Rock Band from South Florida that delivers a Non-Stop show that leaves you wanting more. (Show is pending approval by city following Hurricane Matthew)

Making a return visit to The Hub, The Tom Sartori Band kicks in our Full Moon Party with a high energy performance that will have you dancing the night away on the beach.

Named one of the Top Five Bands to catch in 2016 by CBS4 Miami, The Big City Dogs, classic rock and blues band covers your favorite dance-a-long hits from the 60’s through 90’s. Sponsored by Riverwalk Fort Lauderdale.

2015 Grammy and a Latin Grammy nominee, PALO! closes out the 2016 Mist TWST #SeasideBeats series, with their own brand of “Afro-Cuban Funk” -a unique, danceable sound blending the allure of funky beats and jazzy improvisation.
For more information and the complete schedule of performances and events, please visit www.FridayNightSoundWaves.com or follow Friday Night Sound Waves on social media: facebook.com/FridayNightSoundWaves, twitter.com/SoundWavesFLB. 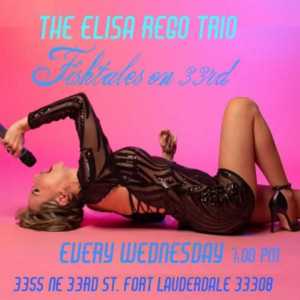 Ladies and Gentlemen, step right up to the greatest show 🎟 Doors open at 4pm 🎪 Join us today for live entertainment and enjoy $1 Wharf lager and $3 wine by the glass from 4-7pm! #KnotWorking #WharfFTL