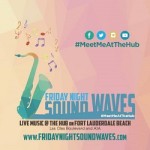 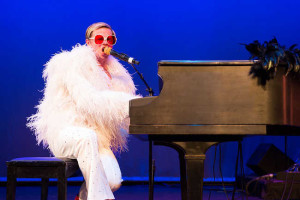 “We are thrilled to bring Friday Night Sound Waves back for South Florida’s local residents and visitors to the area, as music is one of the few things that truly transcend age and background through its global language,” said series producer, Arianne Glassman. “On behalf of our beach business community, I’d like to invite everyone to kick off the weekend and #MeetMeAtTheHub to experience the fun, excitement and casual nature of our beachfront destination.”

Featuring some of South Florida and the region’s best musical talents, performing an eclectic range of genres including Jazz, Blues, Country, Latin Fusion, Top 40, Reggae, World and Classic Rock, Friday Night Sound Waves aims to entertain area locals and global visitors, from the young to the young-at-heart. Attendees are encouraged to slide off their shoes and slip into the weekend, while kicking back on the sand with family and friends, to take in the ocean breeze and spectacular sights and sounds as a lead into their weekend. Interactive experiences on select dates provide local artists, entertainers and non-profit organizations the opportunity to connect with the community through the common language of music, art, entertainment and fun. A Salute to the Military series to benefit United Way of Broward County’s Mission United program will take place over several dates throughout the season. 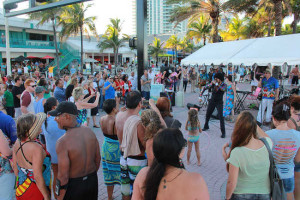 Situated at “The Hub,” the series takes place at the highly visible and central location, known as the heart of Fort Lauderdale Beach, accessible from 17th Street Causeway, Sunrise Boulevard, and its midpoint gateway, Las Olas Boulevard. An on-site information kiosk, which will direct visitors to the areas nearby restaurants, live music venues and attraction options, will also feature details on area hotel and restaurant specials via Fort Lauderdale Beach’s official website, www.MyFortLauderdaleBeach.com.