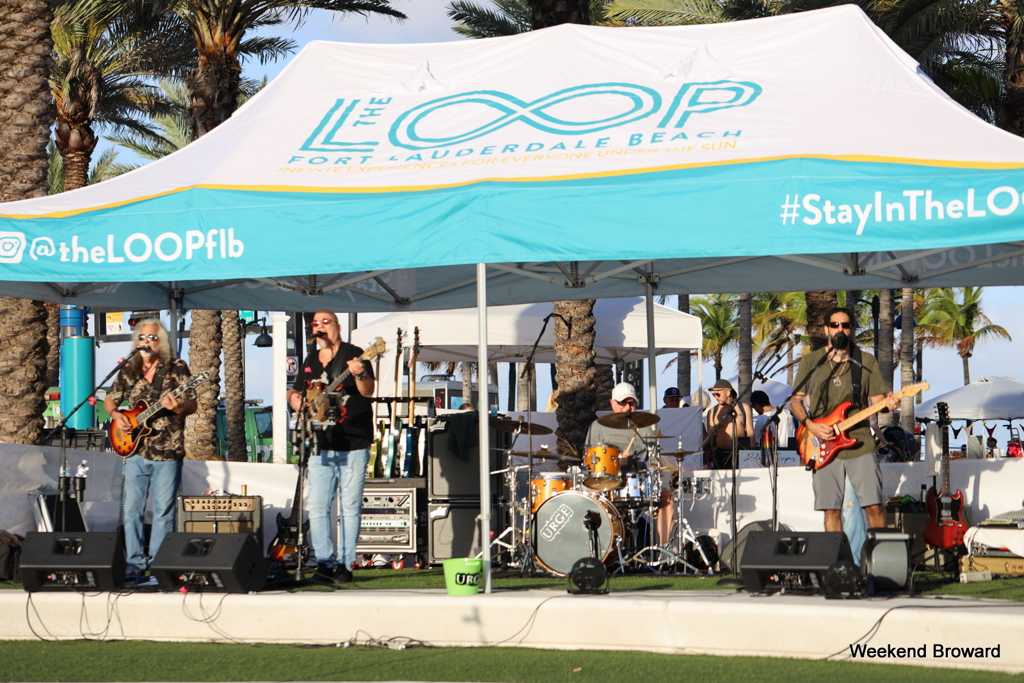 Friday Night Sound Waves welcomes locals and visitors, the young and the young at heart, to enjoy some of South Florida’s best musical talents, performing an eclectic range of genres, including Jazz, Latin, Country, Top 40, Indie, Oldies, and Classic Rock.

Attendees are invited to come early to enjoy a variety of pre-concert activities along with local restaurants and vendors, who will be providing a rotation of food and drinks to purchase before, during, and after the show.

Friday Night Sound Waves was featured in the book, “100 Things to Do in Fort Lauderdale Before You Die,” by Christiana Lilly.

Yacht Rock Band pays tribute to the music known and loved by all by accurately recreating the timeless classics by bands such as Hall & Oates, Billy Joel, Fleetwood Mac, Chicago, Paul Simon, Seals & Crofts, America, Little River Band, as well as the biggest “one-hit-wonders” of the late 70’s and 80’s era. Guests will enjoy a trip down memory lane that will have them singing, smiling, and dancing “All Night Long.”

With diverse styles marrying reggae, rock, and funk, The Holidazed creates progressive, heart-pounding music with modern technological inspiration. Their live performances will capture the audiences’ imagination, soul and put their minds on shuffle. From the first downbeat, the crowd will be singing, dancing and enveloped in pounding bass, driving licks and good vibrations – the divine combination of sound and style.

Not so much a band as it is an experience, The Jay Valor Band has been said to be a “breath of fresh air in a musical climate lacking substance.” From bars to bayous and stages of all sizes, whether it’s a cover song or original tune, the Jay Valor Band delivers sizzling, high-energy performances engaging audiences of all ages and musical tastes with its blended Country, Rock n’ Roll, Southern-Ballad Rock, Fusion and Swing tunes.

Mantrap is a diverse, energetic band that brings a non-stop party to the dance floor. Merging the familiar sounds of Miami 70’s music with a unique twist of today’s top covers, ranging from Disco to Funk, Pop to Rap and Latin Reggaeton, anyone who has partied with Mantrap knows the ‘we are family’ feeling they emit through song is guaranteed to create a night that will not be forgotten.

As the only returning act of the season, Peter Mayer, singer, songwriter, and guitarist, returns to Las Olas Oceanside Park for a stop on the 23rd anniversary of his widely acclaimed Christmas tour “Stars and Promises.” Mayer has released 25 of his own albums, toured internationally with his own band, and has been the lead guitarist for Jimmy Buffett’s Coral Reefer band for three decades. Since that first recording and tour in 1999, Mayer has released four additional Christmas albums and this year celebrates his 23rd year on the road with his world-class seven-piece band. The “Stars and Promises” concerts are engaging and made memorable with state-of-the-art sound and production. “Stars and Promises” brings its unique yuletide tradition to fans who have called this production “a Christmas show like no other!”

The Collektives — are a rising Miami band with an Alternative Rock/Pop sound known for delivering music that is an ambitious mix of dreamy vocals, hooks and powerful songs that connect to listeners. Earning a reputation for uplifting performances that resonate with audiences, rising Puerto Rican/Panamanian front singer Tatiana Blades, leads with incredible power and a distinctive voice that competes with her vibrant stage presence. Each member breathes new life and style into the band’s original music and famous cult classics that transcend genre boundaries and captivate audiences.

The most convenient place to park is the Las Olas Beach Parking Garage, where the PayByPhone payment option can be used, and parking can be extended from anywhere using the mobile PayByPhone APP.

This event is free and open to the public.