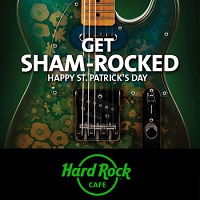 This year, St Patrick’s Day falls on a Thursday.  Authentic Irish Pubs and Die-Hards will celebrate from early morning with breakfast and beer until late night followed by more breakfast in the wee hours.  However, you don’t have to wait until the 17th to get your “green on”.  The two largest cities in Broward will be celebrating on the weekend prior to the 17th.  Read all about St. Patrick’s Parade & Festival in Downtown Fort Lauderdale 2016 on Saturday and the 19th Annual St. Patrick’s Day Parade & Festival in Hollywood on Sunday.

LOOKS LIKE YOU STUMBLED UPON AN OLD PAGE. SEE OUR UPDATED BLOG FOR 2017!

Also on the weekend preceding St Patrick’s Day, the City of Delray Beach will pay tribute with live music entertainment starting on Friday evening and continuing all day Saturday with the parade flowing along “The” Avenue from 2 till 4pm.  Read all about it on our special page dedicated to this event.

Many bars and restaurants will also be celebrating on the weekend instead of the traditional March 17th this year.

A Celtic Rogue Theory at Galuppi’s in Pompano Beach at 7:30pm (and a full day of Irish entertainment starting at Noon with an Irish Fiddler, Irish Step Dancers
Bagpipes, Irish Drummer and Irish Favorites by Tom O’Miller)

The  Hard Rock Cafe in Hollywood kicks off the festivities at 6pm with the Police Pipe & Drum Corps and the South Florida Cloggers. Headliner band for this Thursday is The Flyers at 9pm.  Don’t forget to try their limited time only Guinness and Jameson Irish Whiskey Bacon Cheeseburger!

Cagney’s Saloon in Davie will be celebrating both Thursday and Friday nights.  First, on Thursday with the Piro Band Jam Session, then Friday the 18th with local Rock Cover Band Soulicide. Irish beer specials include Guinness, Smithwick’s and Harps, Jameson Specials and home cooked Corned Beef & Cabbage and Shepherd’s Pie.

Bahama Bob (5-8) and Spider Cherry will be performing at Brendan’s Sports Pub in Pompano Beach 8:00pm. Irish dinners and Green Beer will be on the menu from Noon till Midnight including Bangers & Mash, Fish & Chips, Corned Beef & Cabbage as well as Shepherd’s Pie.

Packy’s Sports Pub in Lighthouse Point will kick off the live entertainment at 3:30 with Irish band Echoes of Erin followed by rock party-band Bounce at 8:00pm.  Also, a long list of Irish specialties including Irish Stew and Corned Beef & Cabbage.

Bagpipes and Joey Kennedy during Happy Hour at Fishtales on 33rd in Ft Lauderdale followed by Bombshell (rock cover band) at 9:00pm

Furious George will be at Chit Chats Bar in Pompano Beach starting at 7:00pm

Snakebite at Whiskey Tango in Hollywood starting at 9:00pm

Crush band will be performing at The Tilted Kilt in Fort Lauderdale where festivities will begin at 6:30pm with The Black Pearl Pipes & Drums.

I’m not sure about the exact band names but you can bet that they are probably the most authentic Irish at two of the largest “block party” celebrations going in Broward each year – one at The Field Irish Pub in Dania Beach and the other at Maguire’s Hill 16 in Fort Lauderdale.  Parking might be a challenge due to the vast numbers of people who are expected to attend each of these with Indoor AND Outdoor activities going on all day long.

You’ll find all the above and more listed at www.weekendbroward.com/live-music/ with more choices for Palm Beach County available too! (see ads below)

What’s going on in Palm Beach County this Thursday?

Crazy Fingers & Fruition at The Funky Biscuit in Boca Raton

Paul Anthony Band at The Pavilion Grille in Boca Raton 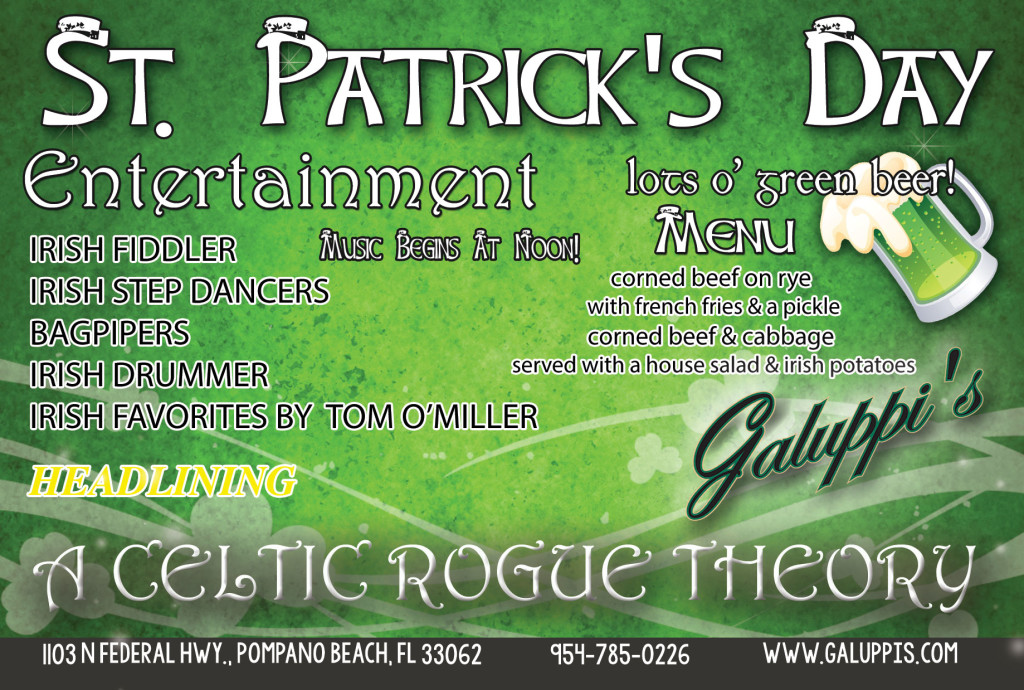 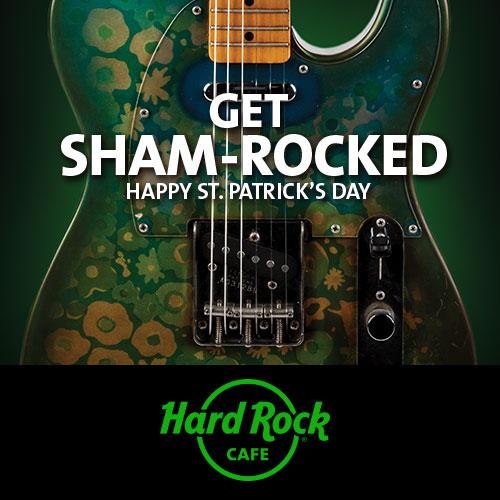 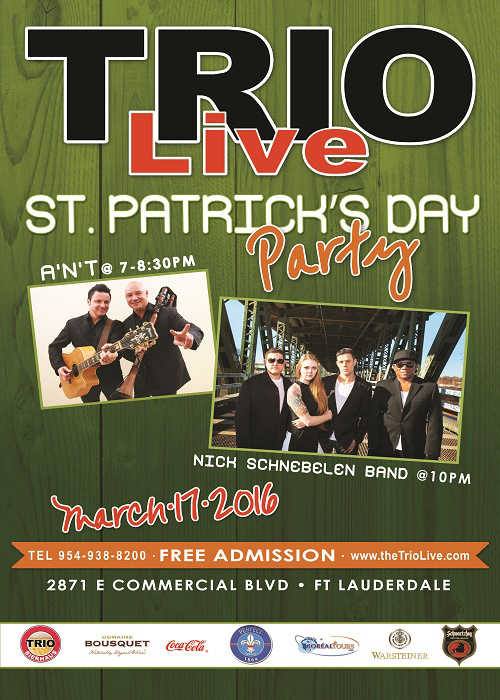 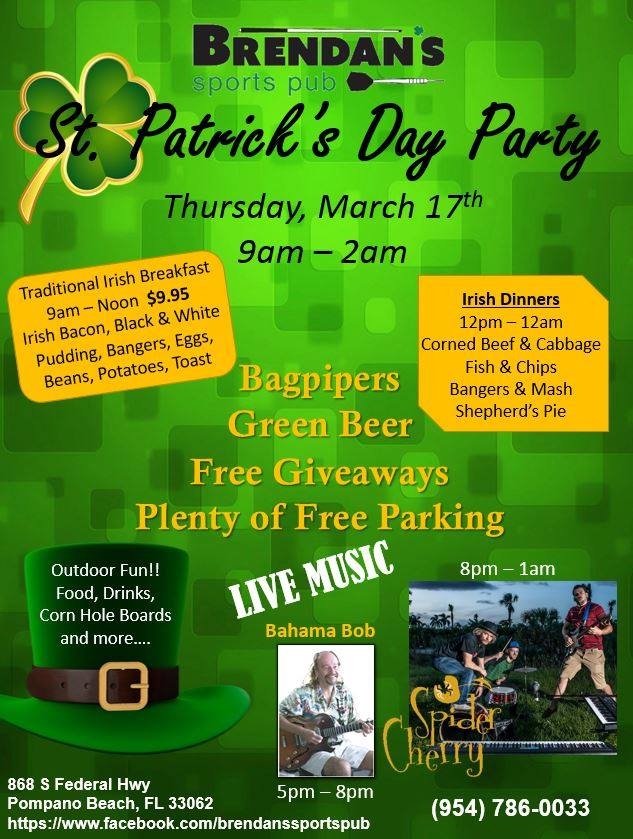 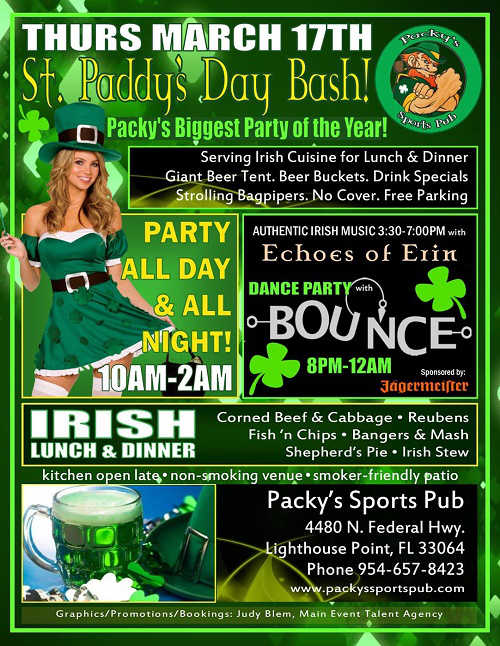 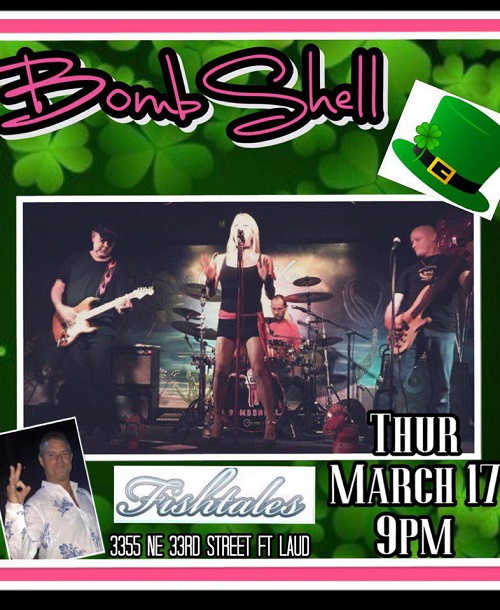 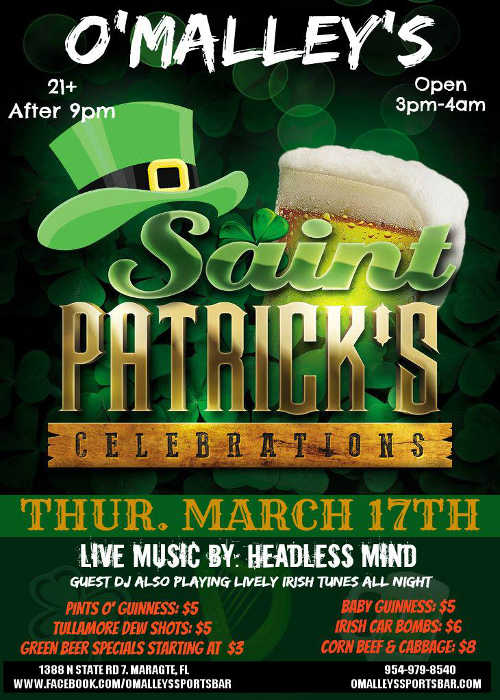 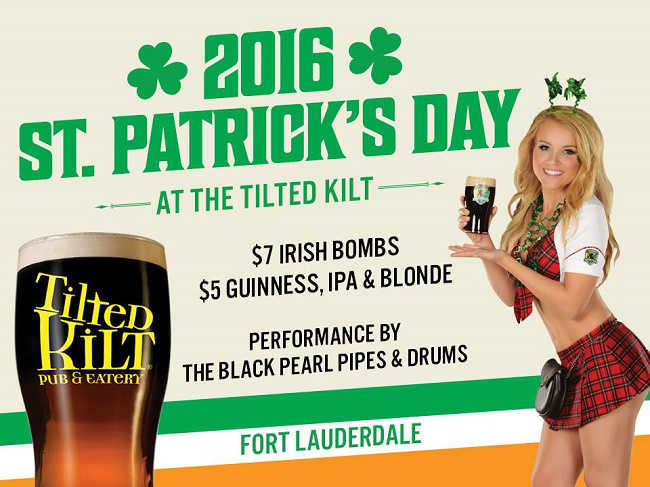 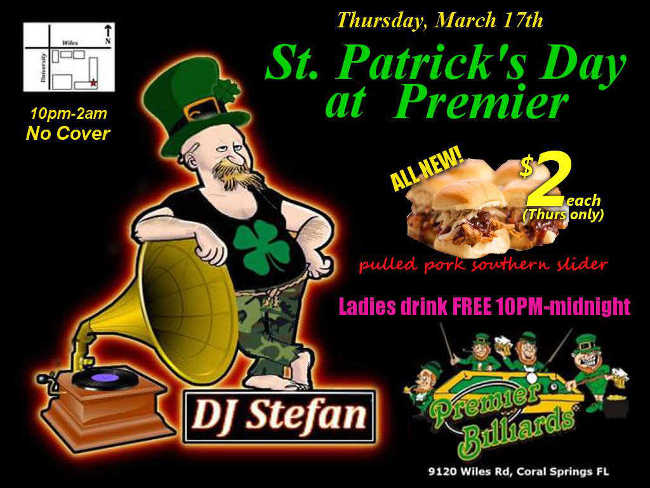 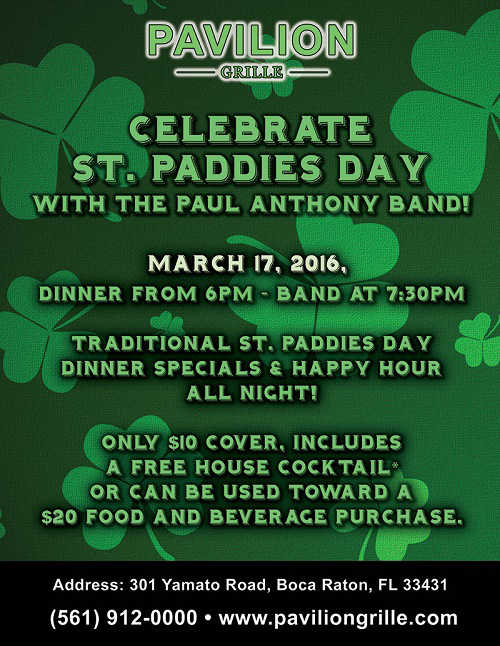 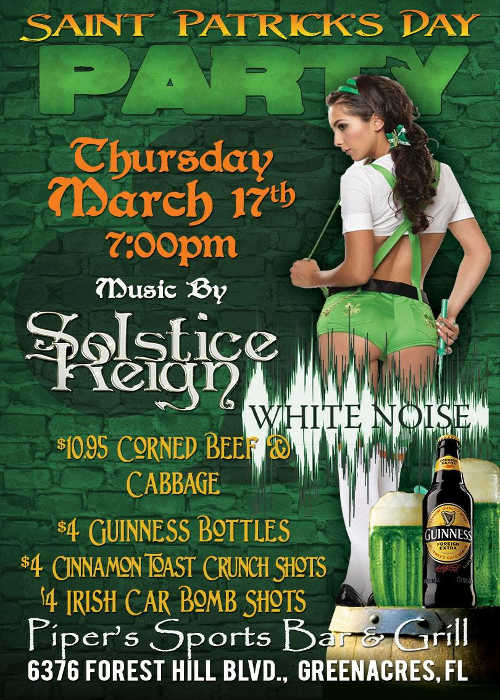 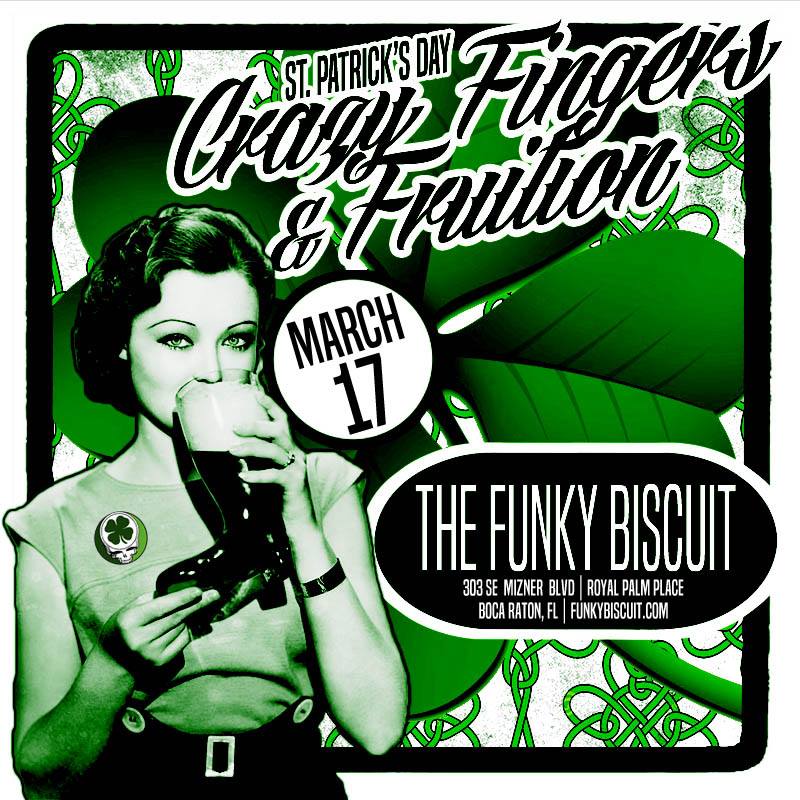 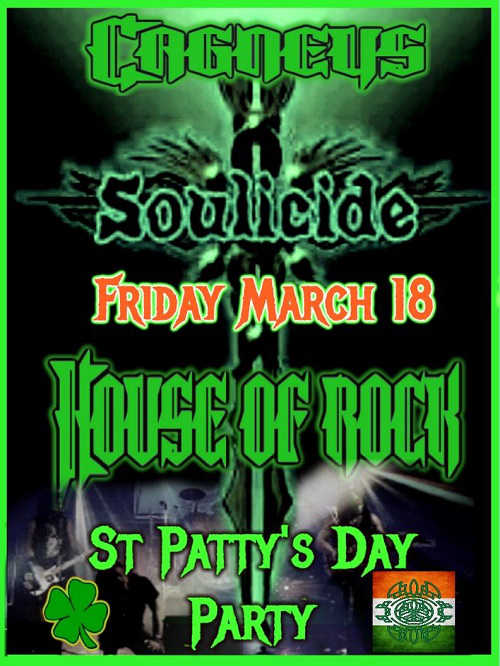 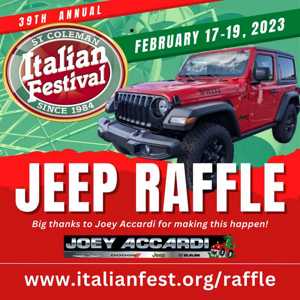