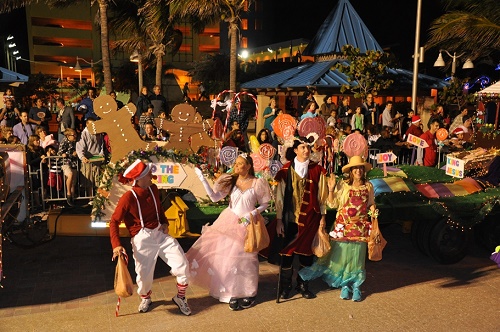 Now in its 61st year, the Candy Cane Parade returns to the Hollywood Beach Broadwalk on Saturday, December 3, 2016 at 7:00 p.m. to delight thousands of spectators of all ages and usher in the holiday season in Hollywood!  The Candy Cane Parade on Hollywood Beach is one of the longest running holiday parades in the country. It was started back in the mid-1950’s by a group of Hollywood merchants as a way to draw patrons to their shops and businesses. Today it features imaginative lighted floats and vehicles, marching bands and dance troupes with parade participants tossing out candy canes and mints all along the parade route.

This year’s parade theme is “Musical Notes and Peppermint Floats.” The parade gets underway rain or shine at 7:00 p.m. on the Hollywood Beach Broadwalk at Scott Street and heads south to Harrison Street. Complimentary bleacher seating is available along the parade route from Garfield Street to Polk Street. Parade emcees will be stationed at Charnow Park at Garfield Street and at the Hollywood Beach Theatre at Johnson Street.

To ease traffic, parade-goers are encouraged to park in one of the downtown parking garages and take the free parade shuttles to and from the beach from 5 p.m. to 10 p.m. The downtown parking garages are located at 19th Avenue at Polk Street and 20th Avenue at Van Buren Street. Standard parking rates apply. The Candy Cane Parade is presented in partnership with the Hollywood Community Redevelopment Agency.


For event information please call the Department of Parks, Recreation and Cultural Arts, Special Events at 954.921.3404 or email[email protected].

Ladies and Gentlemen, step right up to the greatest show 🎟 Doors open at 4pm 🎪 Join us today for live entertainment and enjoy $1 Wharf lager and $3 wine by the glass from 4-7pm! #KnotWorking #WharfFTL