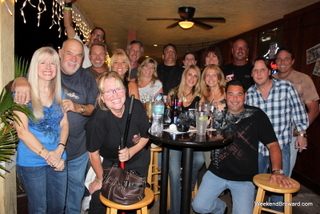 For most of us in the music community, April 18th, 2018 was the day we found out that the co-owner of Chit Chats Bar, Sherry Palmer, was found dead at her home only a mile away from her beloved bar she owned and managed with her husband Pat Palmer.  The cause of her death was under mysterious circumstances and it’s too early to know exactly what happened on that dreadful day but the news of her passing, no matter which story you heard in whispers or via Facebook posts, was nonetheless shocking.

The name Sherry Palmer and Chit Chats Bar were synonymous.  You could not have one without the other.  The neighborhood bar, located off Federal Highway in Pompano Beach was a haven for locals to hang out after work, a place where bikers could stop on their “poker” runs, where bands could take over a stage and rock the night away or be a destination for anyone who didn’t want to go home after a concert next door at the Pompano Beach Amphitheater.

Everyone who is familiar with Chit Chats Bar and Sherry Palmer has their own stories to tell.  My stories are memorialized in the many photos I have taken over the past 8 years during my visits during Wednesday “bike nites” with live music and free BBQ outside the front door or during special celebrations, fundraisers or unfortunately, memorials, that Sherry was best known for organizing for so many in both the music and biker communities.

In addition to all the parties she threw for people she cared for (and that was a lot of people), another example of Sherry Palmer’s conscientiousness that comes to mind was how she converted the bar to non-smoking on band nights so that singers would not have to inhale tobacco fumes while singing their lungs out as well as being more inviting to fans of the band who didn’t care for a smoke-filled bar. She, herself, was a non-smoker and would have liked to make this a permanent decision but as usual, she wanted to please everyone.

In June of 2016, there was community outrage when news came that that the landlord of the strip mall where Chit Chats Bar resided seemed to be doing everything in their power to push them out.  There was so much overwhelming support for Chit Chats that a big party was organized by friends and funds were raised to pay legal fees to help Chit Chats Bar fend off their landlord and stay where they were.  Read all about it in a past blog entitled  “A Community United for Chit Chats Bar”

I recently heard that she was talking with the owner of a neighboring restaurant-bar to see if they would be able to hire the staff of Chit Chats if they closed because she did not think they could fight the legal battles much longer with their landlord.  That was just one more example of how much she cared about the people who worked for her.

Here’s a little known fact: Sherry Palmer was the first person to offer me money to take photos as guests arrived to her annual Breast Cancer charity event.  This prompted me to set up a bank account for Weekend Broward so I could accept a check with a company name rather than my own name and the rest is history!

While looking for a few photos to represent some of my highlight visits to Chit Chats Bar, I ended up with a slideshow instead.  I posted it today on my Facebook Timeline.  It wasn’t easy, but here are a few of the many many memories that will forever live in my heart as I look back at the good times I spent at Chit Chats Bar, with many thanks to Sherry Palmer.

UPDATE: 6-24-2018 Visit our Photo Gallery as we captured images of the hundreds of visitors to Cheers Fort Lauderdale for this event 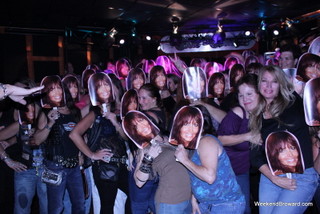 UPDATES: At the time of this blog, funeral arrangements have not yet been made however a page has been set up by Dignity Memorial to which friends and family can add thoughts and well-wishes and ask to be notified of any new updates.  An article entitled “Husband killed owner of popular bar,Police say” appeared on Wednesday, April 25th in the Sun-Sentinel with more details about Sherry Palmer’s death.